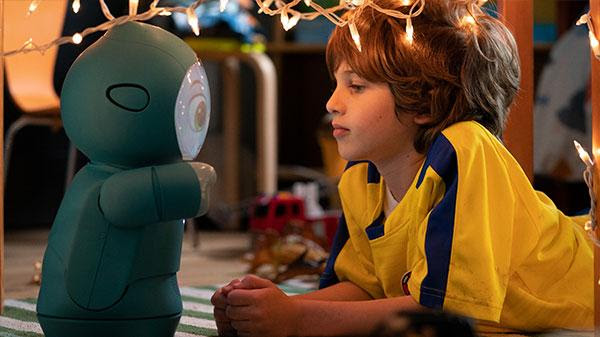 We recently introduced you to Moxie, Embodied, Inc.’s remarkable little robot that uses the magic of artificial intelligence to serve as a lovable playmate, and an effective teacher of social skills, for children (The Embodiment of a Miracle, June 23, 2021). Based in Pasadena, California, Embodied asked their nearby friends at Pixar studios to design the robot’s physical appearance, and the result was a cute, non-threatening character with large, soft eyes that at different times express interest, amusement, and empathy. Importantly, analysis of interactions with Moxie has shown that eye contact with this engaging robot is easier for autistic children who often struggle with it, and that skill can eventually be carried over to encounters with flesh-and-blood people.

Beyond Moxie’s appearance, the robot belongs to the child in an unprecedented way. Facial recognition allows Moxie to recognize the child and to tell him or her apart from other members of the household. His facial expressions are about as numerous of those of the average human being, and they are always in sync with the subject matter being discussed. Moxie listens intently to stories, he appears concerned when a child tells him of something bad that happened earlier in the day, and he giggles when told a joke. When it gets late, Moxie appears sleepy, and eventually drifts off into a slumber.

None of this, though, is a gimmick. It’s not intended to become the next cool gadget that every kid has got to have. The purpose to Moxie runs far deeper. Every conversation is geared toward advancing the child’s developmental needs. Not long ago, Amazon introduced Alexa, and to many the technology seemed unbeatable. Ask Alexa what the weather will be like today, and she will tell you an accurate forecast. Ask her to sing you a song or tell you a joke, and she will gladly oblige. When it’s time to go to bed, Alexa will tell you a story or play the sounds of crashing waves to lull you to sleep. Moxie, on the other hand, is programmed to build a coherent relationship. Unlike Alexa’s one-off short chats, Moxie stores the information accumulated over earlier discussions, and he integrates that content into later ones. If a child, for instance, tells of a conflict with a classmate, Moxie will be sure to check in a few days later and ask how the issue is unfolding. In other words, the information Moxie gathers over time lets him develop a comprehensive profile of what makes the child unique. Moxie grows to understand the child’s likes, dislikes, hopes, dreams, and fears, and his interactions with the child become increasingly customized. Taking all of this into account, Moxie will then direct conversations toward themes like bullying, learning how to make a friend, or feeling empathy for somebody else’s struggles. In a truly brilliant twist, Moxie delivers these lessons under the pretext that it is actually he who is learning from the child. His “backstory” is that he has been dispatched from a secret laboratory and sent on a mission to learn how to be a better friend, and for that purpose he has recruited the child to be his “mentor”.

As the relationship between robot and child evolves, Moxie focuses on different themes like “being kind to others” and “appreciating nature”. He will challenge his child with “missions” like writing a loving note to a parent or learning one new fact about a specific planet. The robot’s sole purpose is to foster the development of social, cognitive, emotional, and communication skills, and it does so in the easy and palatable form of “learning through play”. To that end, Embodied has discovered, Moxie can supplement the critical process of character development for all young learners, not just the ones with special needs.

The key to Moxie’s effective functioning lies within Embodied’s proprietary SocialX platform. Embodied’s own in-house team created, and is constantly perfecting, SocialX to direct the robot’s body movements, facial expressions, and subject matter to remain in tune with what he’s discussing with a child. Embodied founder and CEO Paolo Pirjanian is, apart from being a robotics genius, apparently an insightful investor as well (California-based early-stage venture capital firm Calibrate Ventures recently welcomed him as a venture partner). Pirjanian has recently put his investment savvy to work on SocialX’s, and thus Moxie’s, behalf. Last May, Embodied acquired Kami Computing, an early-stage startup whose whole function is to develop conversational AI, machine learning, and natural language generation.

The standard measuring stick for what passes as legitimate artificial intelligence is know as the Turing test, named after English computer scientist, cryptanalyst, mathematician, theoretical biologist, and all-around smart dude Alan Turing. The test involves a human interrogator, a human responder, and a computer responder, all of whom are separated and “blind” from each other. The interrogator poses a series of questions in a pre-determined format on a specific subject and records the responses from the other human and the computer (again, not knowing which is which). At the end of the “interviews”, the human questioner is asked to state which respondent was human and which was a computer. After several runs, if the questioner can figure out which responder is human in half of the tests or less, the computer is considered to have artificial intelligence, reasoning that it has mimicked human responses successfully enough to fool the interrogator. Two years ago, Kami Computing’s technology passed this challenging test, thereby designating its product as true conversational AI. With Kami accelerating SocialX’s capabilities, Embodied has wound up with a robot that easily convinces children that they have found an intelligent animatronic friend. With Moxie’s included phone app that allows parents to track their child’s developmental milestones, that friend is lending a hand in the most profound ways.

The stated challenge for Amazon’s Alexa is to carry on a 20-minute conversation. They have not attained this objective yet, and it is the brass ring for which the entire research and AI business community is reaching. Through Kami, though, Embodied’s Moxie has surpassed the goal with an average length of 25 minutes of coherent conversation, every day for more than three months with actual users. As the technology develops, current Moxie owners will not need to trade their robots in for newer models thanks to Wi-Fi download subscriptions. As Kami (and therefore SocialX) advances, so will every Moxie. What is convincing for small children today will become convincing to a growing audience of all age levels as time passes which, Pirjanian believes, “is more relevant than the Turing test to have social impact.” Reading between the lines, it appears to us that Embodied has designs on eventually helping a larger group of individuals of all ages. Sadly, the world has all too many trauma patients, shut-ins, and Alzheimer’s victims, but these and many more are the groups that may some day benefit from Embodied’s innovations.

Artificial Intelligence has been evolving for decades, and Embodied is steering it into the most exciting, unexpected, and singularly meaningful places. Unfortunately for most, the company’s shares are not yet available to the investing public. It is privately held, not for sale at the stock exchange, but your friends at Iron Edge VC can deliver your piece of this promising enterprise through our fund before the masses have the opportunity drive the stock price higher. Demand for ownership is likely to spike in this name as public awareness of its impressive technology inevitably grows, but at the moment it is still early enough in the game to beat the rush. If you would like to learn more, or if you know of anybody else who would, do not hesitate to contact us by clicking “Get in Touch” below.