Get an Edge™ with news content.
Home
>
Blog
>
Palantir's Drums Beat Ever Louder 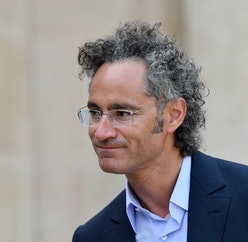 For those not keeping count, this marks the ninth time your weekly Iron Edge VC newsletter has focused on the business of Palo Alto-based Palantir Technologies, Inc. We’ve talked about their eclectic yet uncompromising political stances, their ways of assisting governments with weighty issues like antiterrorism, immigration enforcement, and COVID-19 preparedness, and we’ve talked about how their computer models are making millions for petroleum behemoth BP. Most of all, we have tried to stimulate thought about what might be in store for the company after it goes public (after all, it’s our job to educate people on the benefits of pre-IPO investments). The workings of this highly technical and secretive enterprise can be difficult to understand, and even trickier to explain. Still, after nine outings, it’s getting easier; writing about Palantir is becoming increasingly familiar territory. That’s why we feel that we are going to miss Palantir when it finally goes public. Indeed, it’s starting to look like the old favorite will be spreading its wings and flying from the Iron Edge nest soon, ready to soar to great heights.

Imagine running a highly valued private company. It must be a great experience for those who crave attention. Every time you turn around, you’re asked to appear on CNBC, Bloomberg, Fox Business, or any number of non-financial news networks to talk shop. You knowledgeably field an array of queries related to your business model and maybe discuss the economic landscape in general, all the while knowing that the question everybody truly wants answered is coming. You smile inwardly when the payoff arrives: So are there any plans for your company to go public? Invariably, your response will reside somewhere between playful hinting and philosophical musings, but you never issue an outright denial or a gleeful confirmation. After all, making it official would surely reduce your value as an interview subject. More important, by no means are you required to let the world’s couch potatoes know what your company has up its sleeve, so why tip your hand?

Palantir CEO Alex Karp has mastered the art of keeping the guessing game alive. For years, reporters have been hounding the man for answers. Not one to cave in to this type of pressure, or even that of company insiders who are desperate to cash in on mountains of valuable stock options with which they’ve been compensated for their labor, Karp has a talent for playing coy: “[A Palantir IPO would make] running a company like ours very difficult” (2013); "The minute companies go public, they are less competitive” (2014); "we are now positioned so we can go public." (2016). Karp lowered his guard significantly during a CNBC interview last January in Davos, Switzerland: “Now, we’ve told the company we’re going to IPO”. Karp cut to the heart of the matter during an interview on last Monday’s episode of HBO’s Axios (click here to see a clip), abandoning most of his signature ambiguity. Regarding Palantir’s preparedness for an IPO: "We were building products and we needed to kind of get enough of them out so that people would see the robustness of our company internally and externally… As opposed to every other tech company in the Valley, our plans, if anything, were stronger." Then, he delivered the big finish. When asked if a public debut would occur sooner rather than later, Karp replied, “That’s true”. When pressed further, asked if it would be within a year, Karp said, “I suspect that would be true”. While this might not sound like a resoundingly affirmative proclamation, it’s about as close as you’ll get in the language of private company CEOs. These people do not want to expose themselves to a need to backpedal. In the pre-IPO universe, and particularly with Alex Karp and Palantir, “I suspect that would be true” is a huge tell.

From Iron Edge’s perspective, we feel like we are watching a reboot of a movie we’ve seen countless times before. We’ve seen it with Uber, Lyft, Spotify, Pinterest, and many others. Almost without fail, interest in a specific offering will spike dramatically the moment the company announces an IPO plan. The SEC requires that a company file what is called a “Form S-1” as an initial registration for public trading. The S-1 basically states, “Yep, we are going public. This is absolutely happening”. A day after an S-1 filing is announced, a typical conversation between Iron Edge VC and a client goes as follows:

CLIENT: “Hey, that Acme Corp you were telling me about --- They’re definitely going public now, right?”

CLIENT: “Wonderful. Hey, I’ve been thinking it over. I think I would like to pick some up at $12 after all.”

IEVC: “I’m sorry, but that was a month ago. It’s trading at $16 now. There’s been a lot of interest recently.”

IEVC: “Hold on a sec.” --- muffled discussion with another associate --- “Yeah, okay, we have 1000 shares there, but my partner is talking to another client about it. Whoever gets their money in first gets those shares. The next tranche is at $17.50. We have a fair amount at that level. For the moment.”

While this may have the appearance of a pressure sales tactic, the underlying notion remains true and sincere. It is the nature of this beast. At any given moment, our Fund offers a plethora of opportunities, but the real appetite for individual pre-IPO investments flares up as soon as a public listing becomes a certainty. Acting before this swell in demand is rewarded. At Iron Edge VC, we need to walk the fine line between highlighting the potential for abundant returns while not guaranteeing positive results, but we can comfortably relate from vast experience that hesitation in this arena is a sure way to limit one’s gains.

Since its founding in 2003, Palantir has raised over $2 billion from the shrewdest private investment outfits in the world. They have not needed to raise money since 2015, when they conducted a funding round of $1.1 billion, increasing their valuation to $21 billion. That equates to $11.38 per share. Their average annual revenue growth over the past six years has been about 107%. Again, as a policy we do not make any assurances, but the potential is plain to see in these numbers. We would encourage those considering Palantir to undertake an independent due diligence study to confirm this potential and act on it before an S-1 filing, when so many others are sure to have the same idea. Our inventory resides significantly lower than the aforementioned $11.38 per share. For the moment.

To be clear, Palantir shares are not currently for sale in the public equities markets. You cannot buy this one at the stock exchange today. Your friends at Iron Edge VC have access, though, and we can get you in through the front door before the masses have the chance to drive the share price up. If you would like to learn more, or if you know of anybody else who would, please do not hesitate to contact us.