Get an Edge™ with news content.
Home
>
Blog
>
SoFi in the Days of Lockdown 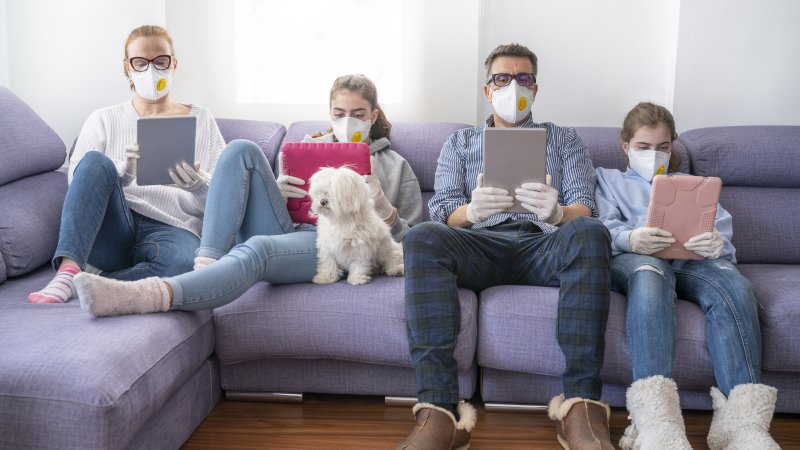 SoFi in the Days of Lockdown

Imagine owning a working time machine and traveling back a few months to last New Year’s Eve. If you had held shares in an airline or a cruise line at the end of 2019, the first words you’d likely speak to your past self would be a strenuous warning to dump the position immediately. Upon further consideration, you might also suggest using the sale proceeds to load up on companies like Clorox and Zoom Video Communications. If the “old you” demanded an explanation for these seemingly random investment directives, you would be hard pressed to describe the first quarter of 2020 in a credible way. Even the three-and-one-half-month younger version of you would think you were making it all up.

What has been called, ad nauseum, the “new normal” is such a radical departure from the life we knew only weeks ago that it’s still often difficult to grasp the magnitude and the complexity of it all. People around the globe are becoming seriously ill and dying. Schoolchildren across this nation are attending classes in their pajamas while their parents conduct work conferences from the living room. People are getting arrested for going to the park. The only predictable result of the COVID-19 pandemic is the self-defeating politicizing of an illness. The most damaging effect of the virus, apart from the death toll, is a devastating blow to our economy and to those of other nations. More than 26 million unemployment claims have been filed in the United States since late March. The Standard & Poor’s stock index fell nearly 35% in a one-month period. A great many retailers and restaurateurs, already imperiled by an unforgiving business environment, were dealt a blow from which they will be unable to recover.

Last week, we told you about how privately held Palantir Technologies has taken the health crisis as a call to action, and that their response is proving to be a dramatic demonstration of the company’s value and effectiveness. Today, we ask you to consider a fintech operation called Social Finance, Inc., or “SoFi” for short, and how the spread of coronavirus has altered their circumstances in a positive way.

SoFi started out in 2011 as a simple concept: persuade some affluent Stanford alumni to pool their financial resources and structure affordable loans for college students. It removed large banks, and their crippling interest rates, from the loan equation and permitted recipients to remain solvent while the benefactors (and SoFi) made a few bucks. The pilot program’s appeal of allowing all sides of the deal to benefit ignited growth that came at a breathtaking pace, and SoFi quickly branched out. Soon they expanded into mortgage lending, home improvement financing, investment advisory, credit cards, investment services, and much more. In less than nine years, SoFi had evolved from a graduate school project to a financial juggernaut that was stamping its name atop a $5 billion football stadium in Los Angeles --- the costliest sports venue ever to be constructed in the history of mankind. Their growth in the last decade is nothing short of stunning, and the “new normal” has ushered in a chapter of SoFi’s story that demands attention.

Many communities find themselves limited these days in the extent to which they can accomplish tasks that were until recently taken for granted. One of these luxuries is the ability to casually pop in to the local bank branch. Do you need to discuss an auto loan? Refinance your mortgage? Chat about diversifying your investment portfolio? Send a wire to Iron Edge VC to finance your Palantir investment after reading a captivating email about the company? All you had to do was visit your banker who was eager to tend to your needs. You even had a good chance of scoring a lollipop in the process. Things are different, though, in the days of lockdown. Many brick-and-mortar banking locations are shuttered until further notice. Those that are open for business have imposed limited, appointment-only hours, and those brave enough to walk through the door are separated from their friendly representative by scary masks and cold plexiglass spit guards fastened to the desks. Even though some branches will allow you to step inside to conduct your business in this impersonal fashion, a huge chunk of the population views this as an unnecessary risk of becoming infected. Among those people, thousands are discovering that all of those banking tasks and more can be accomplished through an easy-to-use phone application powered by a SoFi account. Even better, SoFi brings the goods without the long list of fees to which we’ve unfortunately grown accustomed.

Don’t take our word for it. During this recent interview with Jim Cramer on CNBC, SoFi CEO Anthony Noto announced that his fintech company has enjoyed a record number of account openings during the coronavirus crisis. SoFi has surpassed the significant milestone of one million “members”. The cause of this surge in popularity is quite simple to understand. In the interest of “flattening the curve”, and in many cases by government orders, the majority of Americans are compelled to live their lives within their own four walls. Amazon and Instacart allow you to shop without leaving the house. DoorDash gets you your takeout meals. Zoom aids Junior with his phonics lessons and facilitates your Friday Virtual Happy Hours. SoFi lets you manage your finances inexpensively in your underwear.

The purpose of this communication is not necessarily to extol the virtues of SoFi or to promote it in general, although we at Iron Edge do admire the company and we regularly use the SoFi app. Our specific purpose is to study the revenue-generating potential of a private company in which we can help you invest. Apart from the obvious near-term benefits of SoFi’s suddenly broadened usage, we recognize that the new accounts will beget even more account openings. SoFi represents a leap forward in the personal banking process, and its user friendliness is a vital part of that. People who get to know SoFi during lockdown will inevitably tell others about it. In fact, SoFi even provides incentives for this, granting “free money” for members to use for investing when friends they refer open accounts of a certain size. As new users generate more new accounts, bear in mind that this kind of expansion makes money, and lots of it. SoFi is estimated to have earned approximately $600 million in revenue in 2019.

Another undeniable sign of SoFi’s ability to flourish in difficult times can be found in its steady campaign of adding stones to its castle. In April alone, even as other companies of every kind proceed with caution and uncertainty, SoFi has made two major acquisitions. In the interest of respecting your time and allowing enough space to give these other significant developments the attention they deserve, we will divide our SoFi news into a two-parter and tell you more about 8 Securities and Galileo next week.

SoFi is a company that we believe has its best days ahead, even considering the remarkable progress they have made in less than ten years. Although talk of an IPO on the horizon persists, its shares are not yet for sale in the public markets. Your friends at Iron Edge VC can get you in through the front door and give you access nonetheless. Our inventory is priced at a very attractive valuation for now, but the uptick in visibility could change this quickly. If you would like to learn more, or if you know of anybody else who would, please do not hesitate to contact us.