Get an Edge™ with news content.
Home
>
Blog
>
The Intelligent Eye in the Sky 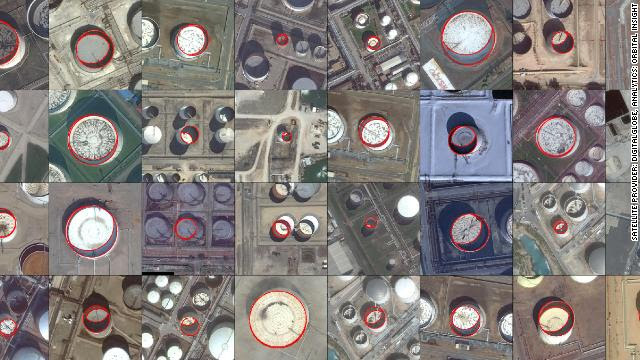 The Intelligent Eye in the Sky

Unless you happen to be employed in the oil industry, there is a good chance you don’t know what an external floating roof tank is, and an even better chance that you’ve seen a few of them without understanding their functionality. From the ground, or from your car zipping past one of these massive storage vessels alongside the highway, they tend to be parts of the scenery that are unlikely to elicit a great deal of curiosity.

An ordinary storage tank with a fixed roof, it has been discovered, has some serious inefficiencies brought about by its design. As the level of the liquid inside lowers, naturally, more air exists between the oil surface and the ceiling. More air presents more opportunity for evaporation. The two most obvious consequences stemming from this are the emissions that can harm the environment, and over time the loss of oil tends to accumulate. Conscientious oil conglomerates refused to accept such an objectionable situation. They did not want to lose a drop of their precious liquid gold. Oh, and they probably figured that the fuss about the environment might as well be looked into as well. This is how the floating roof tank came to be. With a non-stationary roof, the lid actually floats atop the tank’s contents, eliminating almost all of the air space and that pesky evaporation along with it.

Meanwhile, for almost as long as rigs have been extracting the commodity from the earth and the sea, global crude oil supply estimates had been reported on a monthly basis. Industry analysts had to wait for weeks to study a fresh report because the collection of such data was a very time-consuming endeavor. In 2018, though, a company from Palo Alto unveiled a game-changing innovation. With its Global Geospatial Crude Index (GCI), Orbital Insight provided a way to monitor daily changes in the amount of oil being held in storage worldwide. They start with satellite imagery of 25,000 floating roof tanks across the globe. Then, the length of the shadows cast upon the rising and falling roofs at certain times of the day provides reliable evidence of how full the tanks are. As one might imagine, a lot of people will pay a lot of money for such valuable intel.

Before he founded Orbital Insight, James Crawford had a useful background in artificial intelligence technology. At Bell Labs, Google Books and with NASA's Mars rover project, Crawford became very familiar with AI’s mechanism and its broad range of potential applications. Sky-high views, Crawford realized, could be interpreted in logical ways that would yield data that was unattainable from a terrestrial vantage point. Early studies had a decidedly humanitarian flavor. The health of corn crops and an analysis of poverty levels revealed by the height and rooftop quality of buildings in the poorer communities allowed Orbital to assist the World Bank in assessing needs around the world. As operations progressed, the list of possibilities grew steadily and rapidly. At the same time, the company started using drones, balloons and other unmanned aerial vehicle images to collect raw data that could be converted into strategic insights. Anonymized cell phone geolocation information is also used to broaden the detailed snapshot of human activity.

A little less than a year ago, as you may recall, the most basic facets of almost everybody’s methods of going about their days underwent a comprehensive change. Restaurants, movie theaters, and bowling alleys stopped admitting patrons. Video conferencing suddenly became the norm when schools were forced to conduct classes remotely, and businesses of all kinds had to do the same. The coronavirus that was spreading like an international wildfire prompted orders for all to stay home and to “shelter in place”. As it had seized the attention of epidemiologists, economists, and millions of otherwise concerned citizens, an accurate study of the pandemic’s socioeconomic impact became indispensable. Orbital provides an enhanced understanding of what’s truly going on with an analysis of the ebbs and flows of vehicular traffic around urban areas. Satellite data can also let stock analysts know how many parking spaces are routinely occupied at Five Guys vs. McDonald’s, at Home Depot vs. Lowe’s, or at Walmart vs. Target. Insurance companies need to understand the extent of damages wrought by natural disasters, and Orbital’s before-and-after shots deliver the goods. Beyond health and business benefits, of course, Orbital has much to offer to government agencies. The company’s technology lifts the veil from the shipping ports, airports, air force bases, and energy infrastructure locations of friends and foes alike. The value of this kind of knowledge for our Defense Department would be hard to overstate.

Underscoring the credibility of Orbital’s relationship with the United States government is In-Q-Tel’s 2016 investment into the company. In-Q-Tel is an Arlington-based not-for-profit VC firm geared toward bolstering the Central Intelligence Agency’s high-tech aptitude. Alongside In-Q-Tel, Google Ventures, CME Ventures, Sequoia Capital, Lux Capital and Bloomberg Beta have all participated in Orbitals funding rounds. Clearly, there is a lot of smart money flowing into this company. After several rounds of VC activity, Orbital Insight is reported to be one of the most well-capitalized companies in the geospatial analytics industry. Internally, things are humming along as well. Since 2018, Orbital’s year-over-year revenue has been increasing by about 50%.

Most experienced pre-IPO investors in the Iron Edge VC family are familiar with Palantir Technolgies, Inc., and they knew about that big data company’s business model long before most of the rest of the investing community got into the game after Palantir’s September 2020 Direct Public Offering. In the simplest terms, Palantir hoovers up huge volumes of seemingly mundane information and repackages it into extremely useful reports. With that perspective, one can think of Orbital Insight as the “Palantirization” of aerial imagery. They are not simply selling beautiful or breathtaking views of the planet, but rather decoding the informational treasures that can be mined out of a view from above.

Orbital Insight shares are not yet available to the investing public. It is a private company, not for sale at the stock exchange, but your friends at Iron Edge VC can deliver your piece of this promising enterprise before the masses have the opportunity drive the stock price through the roof (floating or otherwise). Orbital’s visibility has been rising steadily, but it is still early enough in the game to beat the rush. If you would like to learn more, or if you know of anybody else who would, do not hesitate to contact us by clicking “Get in Touch” below.

All Our Best,
﻿
Paul Maguire, Managing Partner
and
The Iron Edge Team