Get an Edge™ with news content.
Home
>
Blog
>
The Microscopic Giant 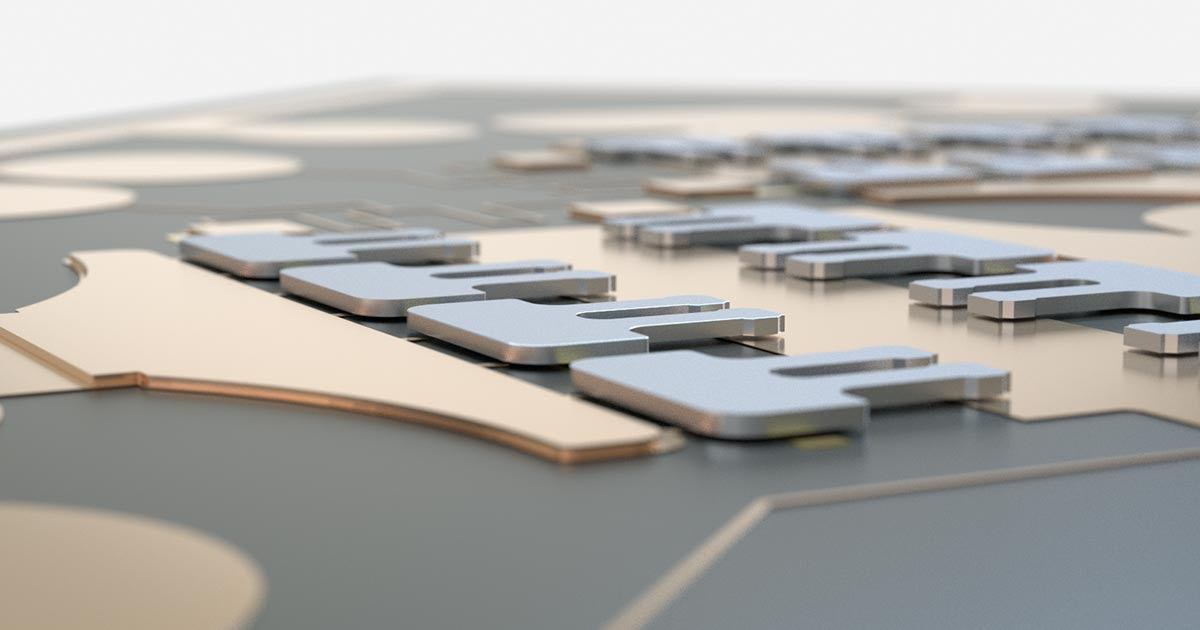 About ten miles north of Iron Edge VC headquarters lies the Township of Edison, New Jersey. The town is, of course, named for the prominent inventor who altered the course of human history there with his innovations in electrical engineering. Thomas Edison established his industrial research lab in that location (it was called Raritan Township at the time) in 1876, and that lab became the launching pad for many of Edison’s greatest accomplishments. Some of the better-known creations include the phonograph, motion picture devices, an improved telephone, and, of course, the light bulb. In all, Edison held more than one thousand patents, many of which were focused on less splashy, but equally impactful, advancements in electrical engineering, such as switches, relays and circuit-breakers. Within the Township, the unincorporated community in which Edison’s early technology incubator stood is called Menlo Park.

In a tip of the hat to Edison and Menlo Park, General Electric's venture subsidiary GE Ventures spun off Menlo Microsystems, Inc., now shortened to Menlo Micro. The abbreviation of the name is most appropriate because Menlo exists in a universe that greatly values miniaturization. The new company, founded in 2016 and located in Irvine, California, had originally been a part of General Electric's Global Research Center. GE’s engineers had been at work on improving micro-electromechanical systems (MEMS) switching technologies for more than a decade. Spinning off Menlo Micro, the company announced a Series A round of $18.7M, accepting funding from Corning, Inc., Microsemi, Paladin Capital Group, and GE Ventures. Corning’s eagerness to have a stake in Menlo Micro, in particular, speaks volumes. The company is a leader in the manufacture of all things glass, from the screen of your cell phone to the fiber optics deep below the sea. Their status as an initial investor in Menlo validates the technology as something that Corning sees as a leading-edge capability for their entry into microelectronics.

So, you may ask, what is it about these MEMS switches that is so important, and why do people feel the need to keep making them smaller and lighter? The answer might make you feel a bit like Corning, Inc., and ignite a strong desire to acquire even a small stake in Menlo if you can. First, the switch is a profoundly important part of your life. You have used countless switches already today. When your alarm clock woke you up, when you brewed your morning coffee, when you drove to school or to work, when you texted a friend, and when you opened your email or the Iron Edge website to read these words, you were using MEMS switches. Simply put, the switch is the most universal and indispensable building block in all of electronics. It’s the most basic electronic component there is. You can't have a functioning electronic device without a switch, because it is what turns the electricity on and off. The flow of electricity in every device needs to be controlled, and that is the switch’s job.

The technology, amazingly, was first conceived nearly two hundred years ago. In 1835, the first electromagnetic relay was used to make telegraphs work. The technology since those early days has evolved more slowly than you might expect. The fundamental architecture found in many of today’s electric switches is not all that different from what was introduced two centuries ago. They tend to be very large and slow, relatively speaking, and over time they will wear out and eventually fail. In 1947, the invention of the point-contact transistor opened the door to the modern semiconductor era, representing a nice step forward in switching technology --- but it was far short of the “holy grail” for which the electrical engineering community was on a perpetual quest. Semiconductors come in a much smaller package, but they also introduce losses or inefficiencies that manifest in the sub-optimal performance of the end products for which they are designed. Transistors, as semi-conductors, are not true conductors. Their losses in contact when the switch is turned on causes the consumption of extra energy needed to operate, which in turn costs money. For decades, engineers have been confronted by the dilemma of picking between electromechanical relays that can bear a heavier workload or the smaller and more scalable solid-state switches --- and having to accept the compromises that come with either one of those choices. It comes down to choosing between the big, clunky, and expensive option or the device that can’t really call itself a respectable conductor.

Menlo Micro’s Ideal Switch is the most revolutionary electronics component invention since the transistor, and it promises to serve as the solution to the electromechanical relay versus solid state switch conundrum. The Ideal Switch is a single invention that was designed to nearly eliminate inefficiencies and energy leakage. As suggested earlier, less is more in the world of MEMS technology. The Ideal Switch is indeed tiny --- about fifty micrometers by fifty micrometers. For reference, the average diameter of a human hair is much larger at approximately 150 micrometers. The Ideal Switch is a true, metal-on-metal conductor, but it is manufactured with an extremely low-cost semiconductor process. The specifications and the engineering behind how these switches function can get very technical, but consider some of the easier-to-digest details about how the Ideal Switch will truly change the game. When switched “ON”, the circuit has infinitesimal resistance, but when switched “OFF” the resistance is ten giga-ohms (take our word for it; that’s a whole lot). The Ideal Switch requires a negligible amount of power to turn on and stay on, and it is small, fast, and silent. Whereas other true conductors will fail over time, Ideal Switches can be engaged more than three billion times before showing any signs of degrading. Then, there’s what Menlo Micro calls the “Rule of 99”. In comparison to electromechanical relays and solid state switches, the Ideal Switch is more than 99% smaller, and it consumes more than 99% less power. Furthermore, it is 999 times faster and its life expectancy is 999 times longer. Whereas semiconductors couldn’t claim the title of switching technology perfection, the Ideal Switch comes astoundingly close to flawlessness.

You might have heard of the “Internet of Things (IoT)”. This disarmingly vague term represents some of the most significant developments in 21st century technology. The IoT is built on the embedding of sensors into physical objects, enabling those objects to communicate with other IoT inhabitants over the internet or other communications networks. Remember that time when you were driving your car and the console informed you that the PSI of one of your tires had dropped to 25? Did you ever wonder how your car knew that? It’s from a sensor inside the tire’s air valve. How about that Nintendo Wii understanding the difference between your forehand and your backhand? Again, it comes from a sensor in the game controller. Sensors tell your earbuds when they need to power up and connect with your phone, too. The IoT is required if you want to have a “smart home”. Apart from these relatable use cases, the IoT is crucial if you happen to be tasked with monitoring building stability in an urban area. Sensors placed in skyscraper foundations provide real-time updates on any issues that may create structural concerns. Aircraft safety, manufacturing integrity, and defense system reliability all owe their current levels of excellence to the IoT and to the billions of sensors that keep it running. The much smaller, faster, and durable Ideal Switches will propel the Internet of Things well beyond the perceived limitations of only a few years ago. The aggregate of the energy saved by using these sensors will be responsible for immeasurable environmental benefits on a global scale. Anybody not recognizing the profound and far-reaching benefits of Menlo Micro’s impact --- and growth potential --- is simply not paying attention.

Now, remembering the seemingly endless list of everyday devices that rely on electric switches, not to mention the myriad commercial, military, and industrial applications with which we don’t typically come into regular contact, consider the possibilities. The total addressable market (TAM) for MEMS switches is estimated to be about $22 billion. Menlo Micro is protected with more than 300 patents related to its Ideal Switch and other technologies, giving the company a five-year competitive advantage of staggering proportions (exclusivity, in fact) in this rich market. The demand for their mass-produced, miniaturized, and energy efficient switches will be overwhelming, and nobody will be offering meaningful competition. In Series A and B funding rounds, Menlo raised $77 million to fuel their commercialization. A Series C round is anticipated in the near future, as Menlo will need to fund the expected growth. In 2021, Menlo completed $10 million in sales, and they are projected to do five times that amount by the time this year is over.

The Ideal Switch’s unprecedented level of performance combined with Menlo Micro’s highly scalable and low-cost manufacturing process promises to bring disruptive improvements in size, weight, power, and cost, benefiting markets from medical instrumentation and industrial sensor technologies to 5-G communications, wireless charging, and countless other applications. More than a mere product, we’re talking about a whole new platform with such a broad reach that it promises to serve dozens of industries. The possibilities are endless. If Menlo Micro shares could be acquired at a low valuation in a traditional stock brokerage account, it’s likely that a buying frenzy would ensue. Of course, Menlo is currently a privately held company, making it impossible to buy at Merrill Lynch, TD Ameritrade, Robinhood, or any other conduit to the public exchanges. Iron Edge VC can, nonetheless, provide you with access to our Funds that have ownership interests in this company that will reshape every technology with which it comes into contact. If you would like to learn more, or if you know anybody else who would, please don’t hesitate to contact us by clicking “Get in Touch” below.

If you have enjoyed this article, visit the Iron Edge Blog for past updates on our pre-IPO opportunities and for general commentary on investment in the private marketplace.